Phase refers to how the stereo information of a waveform is processed, if the waveform is in phase across the left and right channel, the sound will be heard at the same amplitude by the left and right ears. When the polarity of one channel is reversed, the two waveforms would then begin to cancel each other out, leading to the sound becoming quieter or even in silence if this is done with an identical signal. Anytime you’re combining two or more similar signals, phase is the timing relationship between them.

Most phase issues won’t appear in your mixes when listening to music in stereo, but when the stereo information is collapsed into a single mono channel, for example, when played on a sound system in the club (most club sound systems are run in mono), this can result in your tracks sounding thin on these systems even if the track stands up on stereo systems such as your studio monitors, headphones, in the car. By tackling phase issues and regularly checking how your track sounds in mono when producing it, you can prevent this issue from happening when it comes to playing your track to a room full of excited ravers!

We’ve all heard the phrase “Don’t mix with your eyes, mix with your ears”, and whilst this is true when it comes to mixing your channels down, when it comes to phase and stereo imaging, it always helps to be able to get a visual analysis of how that information is being processed. This is where phase and correlation meters come into play, these plugins can give you visual information on whether your track has any phase issues that you may not be aware of.

The correlation meter seen above shows a bar that goes from -1 to +1, when the bar is at 0 the signal has no phase issues and will sound good in mono, when it shows -1 the left and right channels are 180 degrees out of phase when it shows +1 it shows that the left and right channels are identical and if it is around zero then it shows that the two channels have nothing in common. When your audio doesn’t have phase issues this correlation meter will fluctuate between 0 and +1.

The image above shows a phase meter. The phase meter shows a visual representation of the audio across the stereo spectrum, you can see a visual representation of the mono, left and right stereo information. The height of the signal shows the overall volume of the audio and the meter at the bottom is the correlation meter and you can see the metering bar is close to +1, this shows that the audio is close to being completed.

“Phase interactions are well known for their ability to destructively interfere with recorded signals, but an understanding of the process can turn it into one of the most powerful creative tools available to you.” – Mike Senior( Sound on Sound/Mixing Secrets Author) 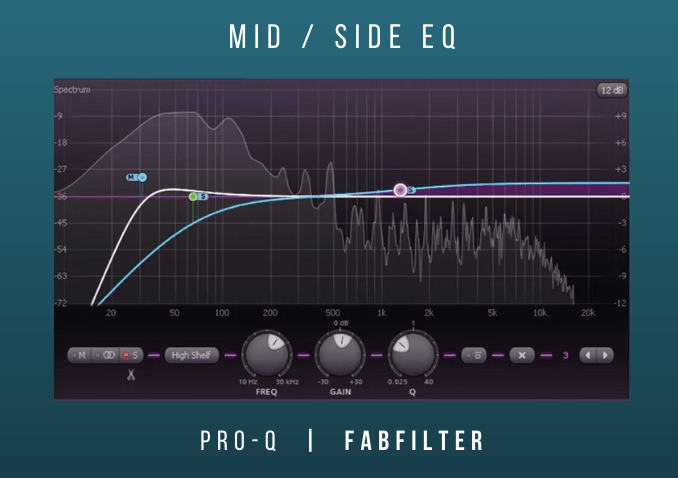 One way to utilise mid/side EQ is to apply a high pass filter (make sure the cut isn’t too steep) to the sound you are having phase issues with, then move the filter up the frequency spectrum as you listen to the audio signal, at the same time you can monitor a phase meter to track how the stereo image is being affected by the changes you are making with the Mid/Side EQ. You will be able to see the correlation meter and the stereo information change as you filter out the lower frequencies from the side.

Through using the Mid/Side EQ technique you can create more focused mixes and avoid some of the phase cancellation issues that may be present in your mixes when you use stereo widening effects such as chorus, reverb, ping pong delays, etc.

Phase alignment is the process of lining up two waveforms so that the stereo information is in phase across both waveforms, this can be quite complex when processing any waveforms other than sine waves, but there are a number of tools that we can use to help master this process.

Phase alignment tools are really useful for times when you’ve got audio that you have parallel processed (therefore creating two audio signals that are doing the same thing) and also when layering multiple sounds as these are times when you can encounter phasing issues as you have multiple waveforms that could become out of phase with one another. Control over this issue can be achieved by using plugins that can help you realign the phase of your audio when there are any alignment issues present in your mixes. 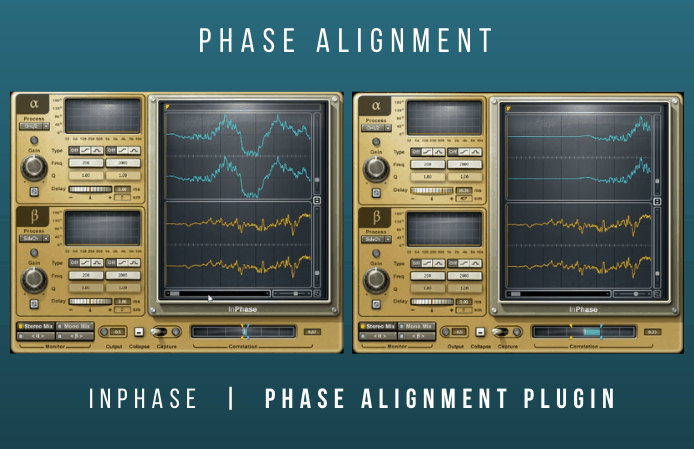 The way these plugins work, is they allow you to view the two separate waveforms and move the delay on one of the waveforms so that the audio information becomes more in phase with the other waveform, it won’t always be perfect but you can usually monitor the correlation meter to see how your changes to the delay on one of the waveforms is affecting the phase correlation of both waveforms, you would be looking for this meter to read between 0 and +1 when you are making your changes.

You can see this happening on the InPhase plugin shown in the images above, as the delay on the top waveform is increased in the unit on the right side, the correlation meter is moving from 0 closer to +1.

Polarity inversion is the process of inverting the polarity of one of the waveform signals so that it has been inverted by 180 degrees, this is another way you can get rid of any phase cancellation issues and it can be achieved in most DAW’s by utilising the polarity (phase) invert button on channel strips/certain plugins/utilities. 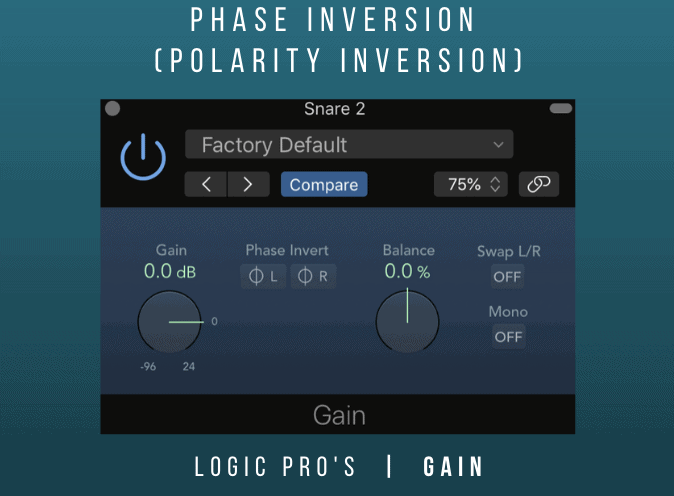 If you have two sounds that are quite similar layered on top of each other, a kick drum for instance, but when you play them together it sounds a little thin, you could invert the polarity of one of the kick drums and that can lead to the combined layer sounding more weighty than they do without the polarity inversion.

“If a recording is done properly and carefully, phase should not be a major issue. But, alas, it’s not a perfect world, and you often have to work with tracks that are problematic from a phase standpoint.” – Mike Levine  (Composer and writer for articles on waves audio)

If we hear two sounds within approximately 35 milliseconds or less of one another, our ears interpret them as being the same sound. This relates to how we determine spatial location by sound, because two noises with a very short delay between them are perceived as one sound, the spatial location is determined by the first heard, dominant sound.

This can be used to help position various instruments around the stereo field without creating imbalances in the levels of the left versus right signals. This can be very useful when trying to create wider sounding instruments that stand out in your mixdown, but you can also create phasing issues when utilising the Haas effect. 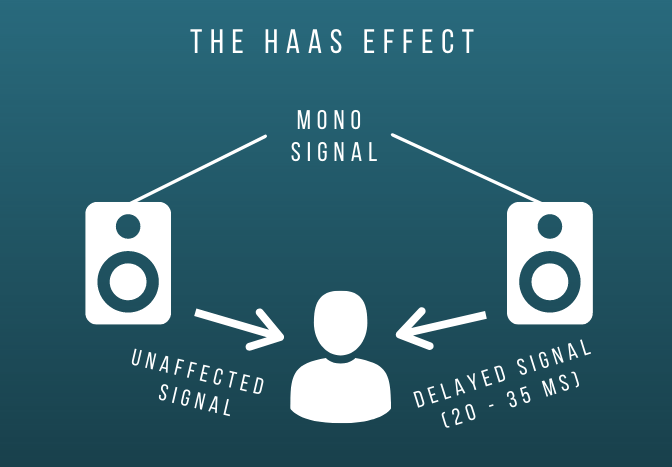 The Haas effect can be achieved quite easily, you need to create a delayed version of the sound that you want to make wider, then pan the original and delayed sounds in opposite directions, one hard left and the other hard right. The timing of the panning is the most important part, you need to make sure this is below 35 milliseconds, different sounds will need different timings so experiment with your settings when testing this out.

At this point you will want to check for any phase cancellation issues with the signal by collapsing the audio to mono and checking the correlation bar on your phase meter, if you are experiencing any phase issues due to the Haas effect, you could use phase inversion on one of the channels, this effect can add a lot of stereo width to your sounds and you may have to play around with the delay times to find a sweet spot when it comes to keeping things as close to in phase as possible.